The Thrill of Flight - Cessna Style 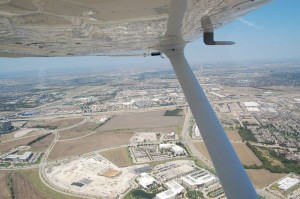 Like many children, I remember looking up in the sky and seeing planes flying over head. My father was in the Air Force and each year the base would have an Air Show. Again, we would marvel at the aircraft and watch the Thunderbirds do their high-speed precision maneuvers.

I joined the Air Force in 1979 and had flown as a crew member but never had the chance to pilot an aircraft.

Over the past couple of months, I’ve been thinking about flying again. No good reason other than it’s a “bucket list” item and I’m not getting any younger.

As I researched the topic, I found that most private pilot schools offer a “Discovery Flight” allowing a prespective student pilot the chance to “sit in the left seat” and pilot a small aircraft. A quick phone call and I was ready to go.

I arrived at Monarch Air in Addison a few minutes ahead of my scheduled time to meet with Clayton Lynch, the Certified Flight Instructor (CFI) who would give me an orientation to the school, the aircraft, and then take me on my first lesson.

The school, hanger, and aircraft were all super clean. It reminded me of my days serving with an aircraft maintenance unit in the Air Force. After completing the tour and facility orientation, we dropped by into the office to pick up our equipment and we were off to the flight line.

Clayton had selected a Cessna 172SP for our flight. I followed him around as he did the pre-flight on the aircraft; visually checking the fuel tanks, insuring there was enough oil in the piston engine, and a number of other tasks to make certain the aircraft is safe to fly. Once completed, we attached a tow bar to the front gear and pulled the aircraft from its parking space.

As I climbed into the left seat, adjusted my seat and fastened my seatbelt; I felt a bit overwhelmed when I started looking at all the controls. I guess I expected less in a small plane! The good news is that things I learned on active duty helped. I knew the names for the various flight controls, and could pick out the basic gauges for direction, altitude, and air speed.

What’s really neat is the Garmin G1000. The G1000 has two cockpit displays--one with all the primary flight data and a multi-function display for mapping, traffic avoidance, and more. Sorry, but I digress from time to time when it comes to technology!

Clayton turned over the engine and it came to life. Within a few minutes the motor warmed up and we were ready to taxi. The adrenalin was pumping as we held short of runway "one five" allowing a corporate jet to take off ahead of us. 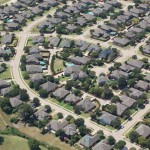 The next thing I know, we’re out on the runway gaining speed and the little Cessna is in the air. We took off towards the south and turned back to the north. I quickly realized we were just to the east of the North Dallas Tollway and I could see where it intersected the Sam Rayburn Tollway. I mentioned that I lived nearby and Clayton offered to fly over my house so I could see and photograph it from the air.

With that behind us, my first lesson began. As I took control of the aircraft, I marveled at how sensitive it was to slight movement of the yoke. It’s like driving a car but you have to think in three dimensions. Turning the aircraft results in a loss of lift so you have to compensate for it in order to maintain altitude.

I banked back to the north and we flew towards the Oklahoma border. Another turn to the left and I could see Lake Ray Roberts. Throughout the flight, Clayton was giving me instructions on maintaining altitude and heading, along with explaining the two displays on the G1000.

As we flew towards the Lake Lewisville marina, Clayton told me to start looking for the runway. It was a bit hazy that day and it took a few minutes for me to find it. I quickly realized I was lining up for my first landing.

The flight had been fun up to that point.

I concentrated on lining up while Clayton reduced our airspeed and lowered the flaps for landing. I was tipping back and forth trying to keep it perfectly lined up. I can only imagine what the pilots in the corporate jet waiting to take off were thinking watching my approach.

I finally realized that Clayton was trying to help me when I heard him tell me to “stopping fighting him” at the controls. We were a couple hundred feet off the ground, so I turned it over to him completely and we touched down smoothly.

If you have ever wanted to experience flying, call your local Cessna Training Center and set up a Discovery Flight. It was a fantastic experience and fulfilled a life-long dream to pilot an aircraft.

Important Notice: The Branch Team with RE/MAX Dallas Suburbs is not associated with the government, and our service is not approved by the government or your lender. Even if you accept this offer and use our service, your lender may not agree to change your loan. If you stop paying your mortgage, you could lose your home and damage your credit rating.

All information provided is deemed reliable but is not guaranteed and should be independently verified. Properties subject to prior sale or rental.